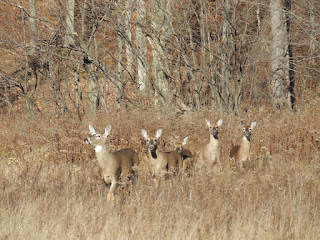 On November 14, 2017 I presented a live webinar through the PA Forest's Web Seminar Center. The webinar was entitled “Two Pronged Approach to Deer Management.” It includes improving habitat while simultaneously harvesting the appropriate number of female deer. The two are integral in managing any wildlife population, but extremely important when managing deer populations. The presentation covered specific habitat improvement practices that can be incorporated into managing natural habitat for deer. In addition, the presentation discussed how to assess the level of deer browsing impacts and use it to determine the need for antlerless deer harvests.

The one hour presentation was recorded. You can view the full recording here.

Later, I discovered Tyler Frantz, from the Citizen’s Voice News, wrote an article based on the presentation I provided. I was not consulted or interviewed for the article.Tyler must have either viewed the live webinar or listened to the recording.

I was mis-quoted a couple of times. Especially here: “He said the key to bringing back the impressive deer herds of yesteryear is to resurrect the early succession habitat that used to dominate the landscape through select timber harvest practices.” I don’t think we can nor should we bring back the “impressive herds of yesteryear” and I NEVER recommend “select” timber harvesting, which most often end up taking the best and biggest trees and leaving the worst. I do agree that we need to have more early successional habitat/young forests on the landscape and discuss that in the presentation.

For the most part, Tyler did a good job of capturing the main points of my presentation and I appreciate his efforts. I have provided the full article below as well as the link to the online version.


Habitat is a key player in deer population in Pennsylvania

With concurrent antlered and antlerless firearms deer season now open across the state, hunters have a decision to make.

To take a doe or let it walk has been a hot topic over the past 15 years in Pennsylvania, and many have opposing views on the right choice from a deer-population perspective.

According to Penn State Forest Resources Extension educator Dave Jackson, it really depends on the area. While extended deer seasons and increased antlerless licenses are often to blame as the sole reason for hunters seeing fewer deer, in many cases, poor habitat is a limiting factor often overlooked.

“Water and space is not a limiting factor in Pennsylvania, but food is a limiting factor,” Jackson said. “We can’t have more deer until we create better habitat for them to thrive. To reach their biological potential, deer need adequate nutrition, and that comes through better management of our forest resources.”

He said the key to bringing back the impressive deer herds of yesteryear is to resurrect the early succession habitat that used to dominate the landscape through select timber harvest practices.

“Mature forests create 50 to 100 pounds of browse per acre, while early succession habitat (immature forests) can provide 1,000 to 2,000 pounds of browse per acre,” Jackson said. “Instead of large scale clearing, land managers should consider cutting smaller tracts in rotating patches for greater diversity, which also creates transitional edge habitat that deer really like.

“Forests cuts less than 10 years old are the best in terms of woody browse, forbs, shrubs and young sprouts, and they draw more deer than older forests. In 30 years, the changing understory becomes very sparse in woody browse, and that impacts the carrying capacity for deer, which are a browse-specific species.”

Jackson said it is important to regenerate mature timber through group openings, clear cuts and the release of mast producing trees, such as fruit and nut trees like apple and red or white oak. By opening up these highly desirable mast species, they can continue to provide nutritious fat content while the forest floor offers plenty of browse.

Another practice is to hinge cut low timber-value trees, such as black gum and red maple, which also appeal to deer.

This process involves cutting the trees just enough to drop them to the ground, but leaving enough of the trunk attached so they continue to produce foliage. It opens up the forest canopy while providing additional food and cover at ground level.

“All of these practices can improve food and cover for white-tailed deer, but it is important to balance our deer population with the current habitat available to them,” Jackson said. “The best way to assess this is a browse impact survey to determine if more or less deer need to be harvested.

“We need to get away from measuring total deer numbers and focus more on deer impact. On average, deer eat about seven pounds of browse per day for seven months of the year, so areas with more forage can support greater deer impact and therefore larger deer densities.”

To measure browse impact in a given area, land managers can assess seedling numbers (how many are available), seedling species composition (if deer are eating non-desirables) and seedling growth height (sprouts exceeding six inches). They can then draw a conclusion on how many deer the area can adequately support.

“Obvious browse lines, mature timber stands and ferns dominating the understory are all indicators of high deer impact, and hunters should consider harvesting more female deer in these areas because the habitat simply cannot support them, while an abundance of diverse forage in the understory can support a higher deer density,” Jackson said. “It’s really a matter of carrying capacity.

“Whitetail deer are a valuable renewable resource that must be managed, but we need habitat before we can have deer. Let’s look at that instead of harping on deer numbers for a moment and understand that things change based on forest succession.”

“Most seasons and bag limits are set to increase deer populations, but deer impact forest regeneration as a function of population and forage availability. If we want to see more deer, we must first focus on regenerating food and cover for them to thrive.”

Contact the writer:
wildlife@timesshamrock.com
Posted by David R. Jackson at 11:40 AM

The webinar does a great job of communicating the close relationship of deer numbers to habitat and the need to manage both. It is consistent with everything that I have observed in 45 years of woodland management and over 70 years of hunting in the same general area.

This being true, it is reasonable to ask how the Game Commission managed to create so much controversy and hunter dissatisfaction when they implemented their herd reduction program. Without getting involved in debatable details, it is possible to form some reasonable conclusions.

I believe that the problems were caused by trying to implement reduction over too large an area, in this case Wildlife Management Units; with nothing more than a desired antlerless harvest for the total geographical region. The fundamental flaw with this approach is that there is no control over where the deer kill takes place.

Most of us have observed that habitat and deer numbers can vary greatly in a short distance. In my experience, which is in the western part of WMU 4D, habitat consists of rural human-occupied property, reclaimed strip mines, timbered woodland, and un-harvested developing virgin hardwoods. Before the herd reduction began, the human-occupied rural areas were devastated by too many deer. Even yews, rhododendron, and arbor vita were consumed in the winter. Mowed areas were nibbled to the ground.

In the strip mine and wooded areas, there was no evidence of overpopulation; and a lot of the timbering included clear cutting that was done at different times. There was no need for reducing numbers here.

Deer hunters tend to be creatures of habit. When the herd reduction began, they hunted where they always did; and the population was drastically reduced on the opening day of the first concurrent season. This resulted in acceptable deer numbers in the human occupied areas and overkill in the others.

As the concurrent seasons and increased antlerless tags continued in the following years, the wooded areas reached a condition of nearly zero deer. It was possible to do four days of hunting and see no more than one or two. Seeing a deer track in the snow was a rare occurrence. Acorn crops went undisturbed on the ground, there was minimal browsing, and a new food plot planted with fall oats went uneaten the first year.

All of the hunters who use my property, and some adjoining woodland owners, agreed to a voluntary no doe hunting policy. In about five years, numbers increased to the point that selective antlerless hunting was instituted. We are now basically following the principles presented in the webinar. They work on a smaller personalized scale, and woodland owners are apparently in a good position to balance deer numbers and habitat.

Thanks for the comment Ed. I agree and advocate that deer population management needs to be made at the property level. Hunters need to be able to read the landscape and make a determination about how many deer their hunting area can support without damaging the habitat. By looking at some of the indicators, particularly browse impact, hunters can make the decision about whether to pull the trigger on a doe or not. If impact is high then reduce deer numbers while simultaneously creating better habitat. It is never just a blanket decision of no doe harvesting. All habitats have a finite number of deer they can support. They key is finding that balance of good habitat and good deer numbers....thus a two-pronged approach.