Invasive Species Thrive on Disturbances from Farms and Other Human Activities 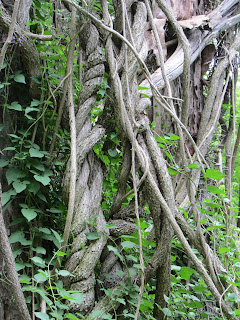 A study by Forest Service researchers using data from plots monitored by the Forest Inventory and Analysis Program found that some invasive species thrive on disturbances from road construction--but farms and other human activities benefit invasives even more. The paper earned an "Editor's Choice" honor in the March 2018 issue of the journal Diversity and Distributions.

NORTH CAROLINA — A study by USDA Forest Service Southern Research Station scientists earned an “Editor’s Choice” honor in the March 2018 issue of the journal Diversity and Distributions entitled: Landscape correlates of forest plant invasions: A high-resolution analysis across the eastern United States. The paper about the influence of roads and landscape context on forest plant invasions was led by Kurt Riitters, research ecologist, with co-authors Qinfeng Guo, research ecologist; Chris Oswalt, research forester; and Kevin Potter, landscape ecologist, along with partners from the University of Florida and Purdue University. The journal's editor, associate editors and reviewers identified the paper as one that is "particularly noteworthy in terms of significance, breath, impact, originality and/or creativity."

Roads provide a means for moving people and products, but they can also allow hitchhiking organisms to spread. Some exotic invasive plants thrive on the disturbance created by road construction that displaces native plants. However, the study found that the presence of a road may be less important than the presence of farms and other human activities.

“In the eastern U.S. a third of all forested areas are within 650 feet of a road, and invasive plants are found on half of the plots monitored by the Forest Inventory and Analysis program,” says Riitters, who works with the SRS Eastern Forest Environmental Threat Assessment Center in Research Triangle Park, North Carolina. “While there is little doubt that roads are linked to forest plant invasions at local scales, effective resource conservation at regional scales requires an understanding of other factors linked to both roads and invasions across the larger landscape.”

To gain this understanding, researchers developed a series of models that allowed them to see the incremental influences of land use (including agriculture and development), forest fragmentation, local site conditions, and regional ecosystem characteristics in comparison to road proximity effects in eastern U.S. forest plant invasions. The models used FIA data collected on more than 23,000 forested plots between 2001 and 2011.

Results of the study demonstrate the value of the modern FIA program for answering non-traditional forest inventory questions. Forest health managers can use the findings to develop regional strategies to control or eradicate invasive plants. Scientists monitoring forests and developing risk assessments can also apply the model results.