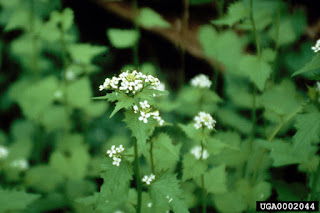 Have you noticed much garlic mustard (Alliaria petiolata) this spring?  I noticed in my work area, in Central PA, it is mostly absent or greatly reduced in numbers. Below is an update from Dr. Bernd Blossey from Cornell University. Are seeing the results of soil microbial communities as Bernd suggests?

Background
Garlic mustard (Alliaria petiolata) was once considered one of the most problematic plant invaders in eastern temperate forests. Declines in native plant species diversity and deterioration in general forest health were attributed to advancing garlic mustard. The lack of success in controlling the species resulted in the initiation of research to develop a biological control program. While ecological investigations were pursued, chemical, and often physical removal programs continued (including “garlic mustard challenges”). At the same time researchers established long term permanent monitoring plots in preparation for potential insect releases. In these plots the abundance of seedlings, rosettes and adult stems, stem height, reproductive output and herbivory were recorded.

New Evidence
Monitoring of garlic mustard at many sites across the Northeast and Midwest in these permanent plots has shown that over time adult density, rosette density, stem height and the number of siliques is greatly reduced to an extent where garlic mustard, while present, is reduced to extremely low abundance (Fig. 1). These results occur at all sites. Additional work using soil sterilization has shown that these effects are, most likely, explained by negative soil feedback, i.e. the build-up of soil microbial communities that selectively suppress garlic mustard (other plant species appear unaffected). We are currently preparing these results with our collaborators for publication in the peer reviewed literature.

Fig. 1. Garlic mustard adult density, rosette density, stem height and the number of siliques over time (since establishment of monitoring plots). Data are pooled from multiple sites in NY and IL.

Recommendations
We are aware that many organizations and communities are gearing up for another season of garlic mustard removal, often dubbed “garlic mustard challenges”. The most recent ecological work has shown that effects attributed to garlic mustard invasion are more likely effects of invasive earthworms and abundant native white-tailed deer. Garlic mustard will only be able to invade and establish populations in areas, which have been colonized by earthworms. Removing garlic mustard will not help to restore thriving native communities. In fact, removing garlic mustard will set back the “self-inflicted” population declines by preventing negative soil feedback. Only in places where garlic mustard is not controlled will the species decline rapidly (often within 5-10 years after initial invasion, but more observations are needed). We recommend stopping all active garlic mustard removal (unless initial invasions can be stopped by removing a few individuals away from well-established populations) and instead focusing on planting native species. Native species will need to be protected from deer herbivory behind fences or in cages until deer populations are sufficiently reduced. Please be aware that garlic mustard will continue to spread to areas where the species has not occurred previously. The decline in population and vigor is a function of residence time.
Posted by David R. Jackson at 1:36 PM

Very interesting! I have been pulling garlic mustard on my and 3 acres for the past 5 years, this has been an incredibly labor intensive process. I've had increased difficulty getting all the plants because I've noticed they are becoming smaller and harder to spot so your research is very interesting to me! I've also observed that my neighbors land has not become over populated and actually seem to have less garlic mustard than I do, despite the fact that none of them pull it. I've often wondered if I'm doing more harm than good by pulling the garlic mustard and disturbing the soil. This year I decided to abandon my efforts since they have not been effective and see how it all plays out.