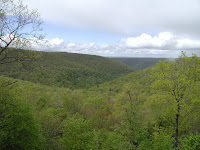 April 13 - A new study appearing in the journal Bioscience reveals that, since the 1970s, eastern forests have begun to diminish again; roughly 3.7 million hectares of forested land-an area larger than the state of Maryland-have been transformed into subdivisions, tree plantations, and lunar-esque landscapes resulting from mountaintop removal mining.
Posted by David R. Jackson at 11:38 AM