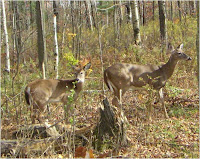 The Commissioners gave final approval to add an additional 4 Wildlife Management Units (WMU's) to the split 5 day antlered and 7 day concurrent season.  That makes 8 WMU's (2C, 2D, 2E, 2G, 3C, 4B, 4D, 4E) now that do not have a concurrent season during the first week of the regular gun season.  Hunters with Deer Management Assistance Permits (DMAP) may still use them to harvest antlerless deer during any established deer season.

A reduction in season length and a reduction in the number of permits allocated is sure to increase deer populations.  Unfortunately, these changes do not coincide with habitat recovery.  The units with the reduced allocations and season length have some of the poorest understory forest conditions in the state.  How the Game Commission plans on those areas supporting more deer without further habitat degradation is an area of concern.

DMAP permits are made availavble to landowners who have an excessive number of deer on an individual property.  It allows the landowner to harvest additional deer based on the rate of 1 antlerless deer per 50 acres of forestland or 1 antlerless deer per 5 acres of farmland.  What it does is allow landowners to control localized heavy deer populations so that landowner objectives are able to be met.  Reducing the allocation available for this program could have a significant effect on certain landowners being able to meet their own objectives for land ownership.

To read the full story go click here.
Posted by David R. Jackson at 11:14 AM

My understanding is that the Board of Commissioners will consider additional private landowner DMAP approval above the limits on an individual case basis. Folks should contact a receptive commissioner to take it to the full board for approval.

Hi Dave, I read your blog. I have emailed the Pa commissioners several times encouraging them to stay the course on current deer management. What can the average hunter do besides filing a lawsuit?CAC didnt even ask for a 20% deductin in doe tags.
Maynard Zimmerman