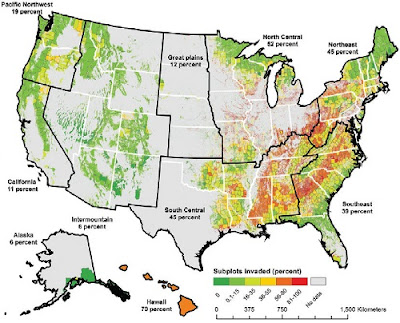 Invasive plants are increasingly altering the structure and function of our natural environment, and now researchers have determined how far-reaching the problem has become. According to a study conducted by U.S. Forest Service and university scientists and published in the journal NeoBiota, at least one invasive species is present in 39 percent of forested plots sampled nationwide for invasive plants by the Forest Service ForestInventory and Analysis (FIA) program. Results are provided for all U.S. regions and reveal that a significant portion of the more than 741 million acres of forested land in the United States has been invaded.

“The accumulated FIA dataset includes multiple measurements of the same plots and continues to grow through time. This will allow researchers to expand the knowledge base and fill knowledge gaps as invasion patterns at large spatial and temporal scales are revealed,” says Christopher Oswalt, FIA research forester and the study’s lead author. “For this study, our intention was to let people see how large data sets can be used to understand macro-scale issues and monitoring forest invasion. This broad-scale study gives us a wider perspective that one can’t get from local studies,” says Qinfeng Guo, a study co-author and research ecologist with the Eastern Forest Environmental Threat Assessment Center.

Scientists are seeking to understand what processes influence the scale of invasion and how species behave, especially under different growing conditions, but one thing is clear: land use legacies appear to play a large role in the patterns of invasive plants and the impacts they may have. In the southern United States, for example, the “top two” most invasive plants are Japanese honeysuckle and Chinese privet — both introduced and once popular for ornamental and other purposes. Some rose species, such as multiflora rose, and Chinese lespedeza were introduced to stabilize soils, among other uses.

The progression of time shows how well a plant manages to spread, and thus, becomes considered invasive. Invasive plants that have been around for some time and are widespread call for a great deal of physical effort to rid them from a site, so it is important for landowners and managers to become part of the solution to the invasive plant problem.

Prevention of the introduction or propagation of invasive plants is the first line of action. Whether managing many acres or a small garden, landowners and managers should become familiar with plants that become invasive and not purchase or plant them. If landowners or managers cultivate invasive plants and choose to keep them, collection and disposal of the seeds are necessary, as are measures to keep invaders under control so they cannot spread beyond where they are planted.

If invasive plants appear in a forest, neighborhood, or garden, or if plants begin to spread along margins where they are not welcome, control and elimination are essential. Limiting how plants reproduce (destroying seeds, altering habitats to prevent establishment) is an effective way to restrict spread. Weeding out a small patch of an invasive plant may save neighbors and managers of local forests and parks many hours of work and could reduce other impacts on natural resources, including water and wildlife, as well as management costs.

Rapid response and steps to eradicate unwanted introductions are easier in the long run than having to manage the complex consequences of invasive plants. Many user-friendly resources are available to help landowners, including:
•A field guide for the identificationof invasive plants in southern forests
•A management guide for invasiveplants in southern forests
•Biological control of invasiveplants in the eastern United States
•Southeast Exotic Pest Plant Council
•Invasive.org