The Science Behind the Whitetail Rut

I thought I would share another fitting article about deer.  This one is from our local outdoors writer, Mark Nale.  Very appropriate, I was out archery hunting this morning and experienced the rut in full swing.  Just a couple more days to fill your archery tag in the early season, it ends on Monday, November 12th.


Why knowing the science behind the rut can help bow hunters this season
By Mark Nale
November 03, 2018 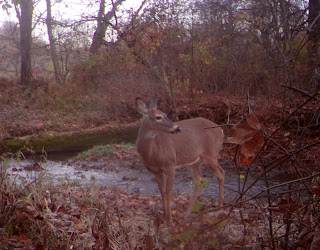 The rut, the mating period for white-tailed deer, is upon us. It is the time of year that bow hunters look forward to, beginning in late October and lasting about a month. The rut signals an increased activity period for bucks as they patrol their scrapes with hormonal hankering in their eyes and search for does with which to breed. For hunters, it means that new bucks might move into the area where they are hunting.

Conversely, it is also possible that bucks that have been scouted and/or patterned earlier in the archery season have broadened their territories and are now looking for does elsewhere. At this time of year, most experts agree that if you find the does and hunt there, the bucks will come.

Although some hunters claim otherwise, the rut in Pennsylvania has little, if anything, to do with the weather or the phases of the moon. According to Quality Deer Management Association biologist, Kip Adams, it has everything to do with photoperiod -- the hours of daylight and darkness within a 24-hour period. The hours of daylight have been getting shorter since June 21.

By summer’s end, those shortening hours trigger the death and hardening of a buck’s antlers, velvet shedding, rubbing, scraping, and sparring activity -- and finally the onset of the rut. The rut is timed appropriately so that most fawns are born during a period with good vegetation for cover and ample food for the lactating does. Although some are born earlier and some later, in Pennsylvania, optimum survival benefits occur for fawns born the last week of May and the first week of June. “The bottom line is northern whitetails have a narrow breeding window to optimize doe and fawn health and survival,” Adams said.

In Pennsylvania, the rut peaks in mid-November so that most fawns are born during the days surrounding June 1. Duane Diefenbach, Leader of the Pennsylvania Cooperative Fish and Wildlife Research Unit stationed at Penn State, recently explored the effect of the pre-rut and rut on deer movement in the popular Deer-Forest Study Blog.

“We know that about 20 percent of the females are bred during the last week of October,” Diefenbach wrote. Half are bred by November 13. According to data obtained by tracking radio-collared bucks, Diefenbach noted that buck movement, as measured by their average hourly speed, stayed about the same from mid-September until the rut began the last week of October. Once the rut started, buck activity greatly increased during the day as well as at night. Although bucks do not move much faster, they were found to move during more hours throughout the day.

The same was true for the sizes of their home ranges. Using fall 2017 data from the adult bucks being tracked (all at least 2.5 years old), Diefenbach estimated their weekly home range size. “Beginning in late September the home ranges of these bucks steadily increased -- from about a square mile to almost four square miles,” Diefenbach reported.

Bucks are more active, but what about the does? Pennsylvania research data show that does decrease their movements slightly in October and then they stay about the same even during the rut. The size of their home range also stays about the same throughout the rut as compared with the October pre-rut period.

“During the rut, bucks are looking for females,” Diefenbach wrote in the blog. “If you are a female, you want to be found. The best strategy is to stay put.”

The statewide archery deer season began on September 29, and ends on November 12. The winter archery season runs from December 26 through January 12, 2019.

Mark Nale lives in the Bald Eagle Valley. He is a member of the Pennsylvania Outdoor Writers Association and can be reached at markangler@aol.com.
Posted by David R. Jackson at 3:56 PM